Below is presented a summary of select countries and industries. The data-set includes responses from a number of additional countries and industries, which will be published on an ongoing basis when sufficient data volume has been collected. We look at the distribution of replies, rather than the single-number method applied by Hofstede. 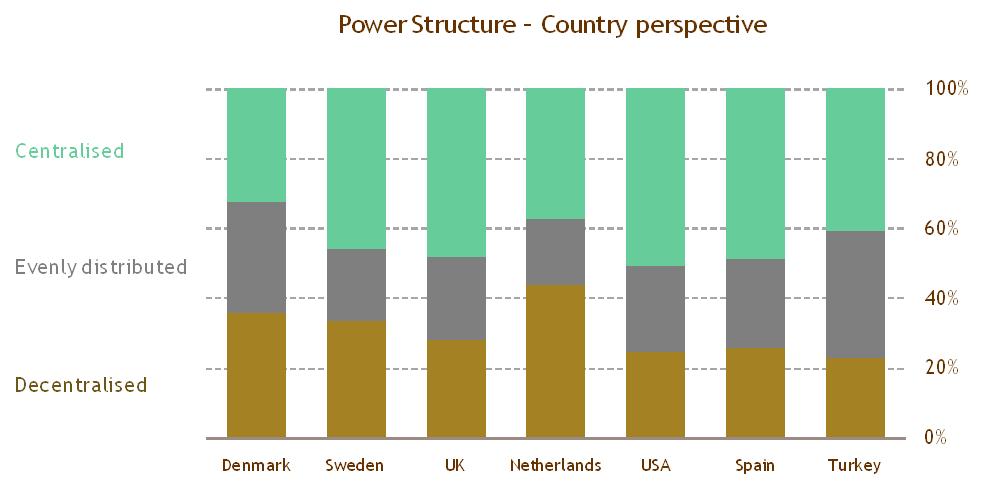 Figure 2 above depicts those countries where sufficient amount of new data has been collected. The column chart suggests that national differences in power distance have become blurred. Furthermore, underlying data seem to suggest a significant readiness for change towards further equalization in the future. Hence, there is indication that national stereotyping has become less relevant as a tool to plan for and structure cross-cultural change.

For comparison is shown Hofstede's Power Distance Index for the same countries. A low number indicates low power distance, a high number high power distance. If, for instance, we compare Denmark and Turkey with the new data for the power distance parameter it is evident that national differences have become less distinct as is evident from Table 1 below.

When comparing our the power structure results with Hofstede's data it is evident that the country variance has diminished as illustrated in Table 2 below, 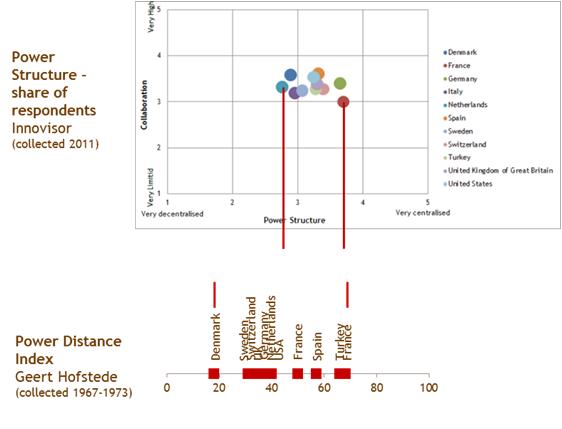 The pattern in the data is pretty similar when scrutinizing data by country, so one can ponder the question, whether this difference will increase when comparing industries. In the following we examine select industries where sufficient data has been collected, i.e. the Consulting industry, the Pharmaceutical industry, Health Care/Medical and the Research/Science industries. 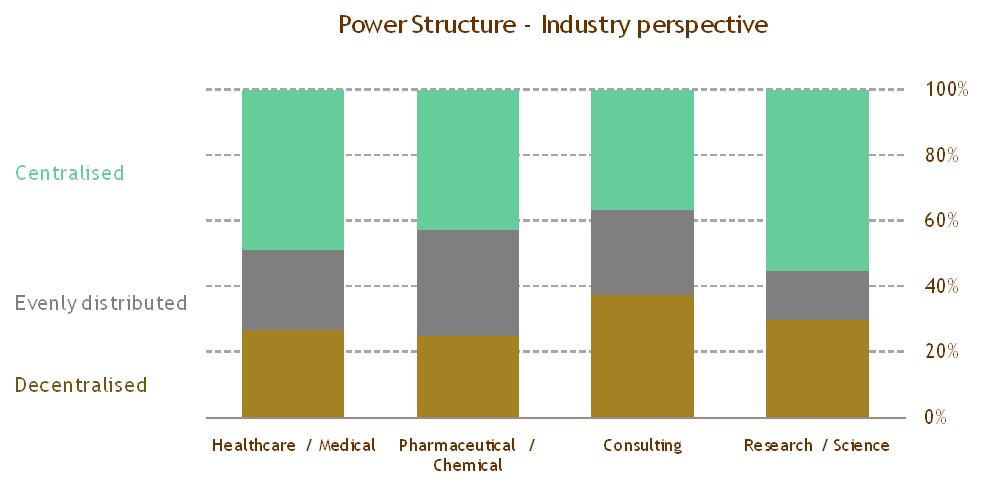 The lowest power distance is to be found in the consulting industry. In this industry employees are constantly subject to new project formations and new team roles reflecting the individual's competence in relation to the specific project. Perhaps not surprisingly, the respondents here have indicated a preference for even further decentralised work environment.

Research and Science by contrast is the most centralized oriented of the four, whereas Healthcare/ Medical's score is in-between. This result is somewhat surprising, particularly when taken into account that innovation is often sparked between persons rather than by single individuals.

The pharmaceutical industry has the greatest desire for change, as both managers and employees prefer management to be more decentralised. This may be so because this industry is operating in a highly regulated business environment. In turn, Research and Science seems the industry with the least desire for change.

The second summarization is focused on collaboration within the same select industries as depicted in Figure 4 below: 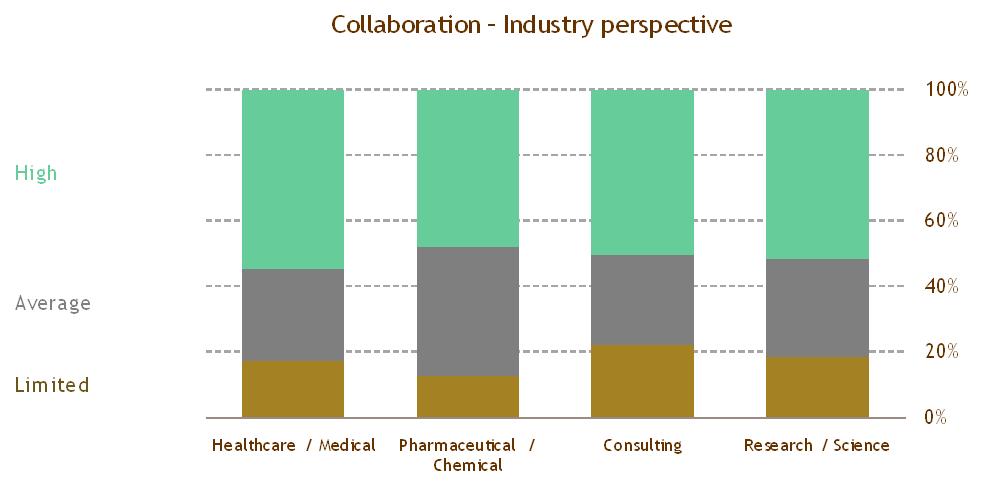 Again, scores for all four industries are very high on perceived collaboration. In knowledge industries collaboration is key to progress and survival. The score for Healthcare/ Medical is marginally higher than for the other three industries.

All four industries prefer more collaboration. This may be because the word collaboration in some countries is a positively charged word. However, it is worth noticing that sometimes less collaboration may be called for in order to make an organization more effective.

Generally speaking, the difference between industries is more significant than that between countries, despite the fact that we are looking at knowledge industries that are relatively uniform. In this article, we have omitted other industries, such as Public Sector, Education, Computer Science, etc. since the data volume is still too limited to make firm conclusions. However, preliminary data suggest an even greater difference than in the four sectors presented here.

If we break down data further into sub-groups data suggest a collaboration gap between perceived and desired collaboration, as illustrated in Table 3 below, 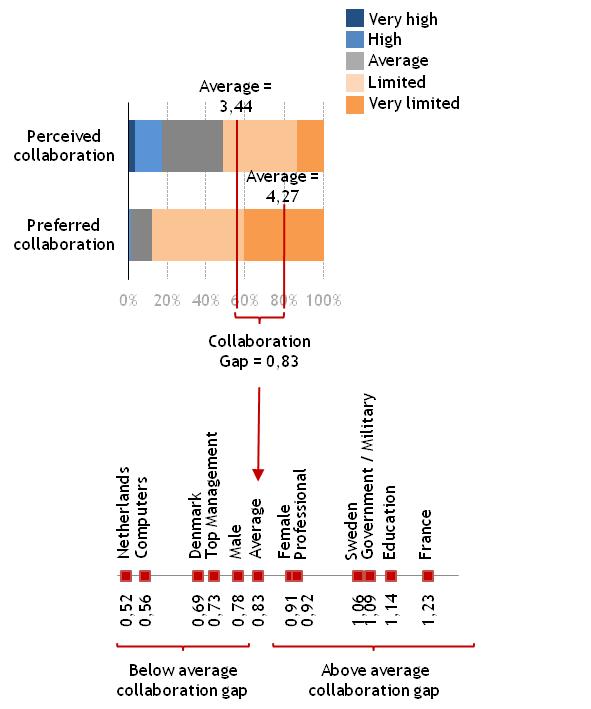 So how can this new insight be used and applied? First and foremost, caution is advised with regard to the general use of stereotypes. In other words, all Germans are not typical Germans and so on and so forth. Indeed, globalization may have made the world more uniform, in part because we travel more, privately as well as professionally. Instead, other groupings appear to be relevant to look at from a cultural perspective, such as industry, education and gender.

No doubt, collaboration and communication are crucial to progress and survival in the Global Knowledge Society. Presently, the EU countries have a hard time keeping up with the competition from BRIC countries like China, India, Brazil and Russia. Fierce competition equally applies at the business level, as multi-national companies try to figure out how culture influence collaboration and relations in their organisations. The most successful companies shape their business strategy such that the cultural configuration of any particular country works to their benefit.

So returning to the initial question. Has our world now become so globalized that Geert Hofstede's research on cross-cultural differences has become obsolete? The short answer is no. People are still different, but less so than before, and this no doubt is because of globalization. Consequently, is still critical to understand other cultures, because differences in human behaviour prevail, and so does the way we communicate. However, the new data clearly indicates that people's desires and wishes for collaboration and power structure have become more similar than ever before. Whether this means a future with just one big world culture only time can tell.


First part of this article

Morten Cavling Arendrup holds a master degree from University of Copenhagen in Business Law, 1987. Morten is Senior Manager with the consultancy practice Innovisor, and has more than 20 years of working experience. Morten has six years of cross-cultural experience from living abroad.

Jeppe Vilstrup Hansgaard holds an MBA from Henley Business School, 2003 and a certificate in Strategic Decision & Risk Management from Stanford School of Professional Development. Jeppe is Partner in the consultancy practice Innovisor and has working experience from 20 different countries in 3 continents.